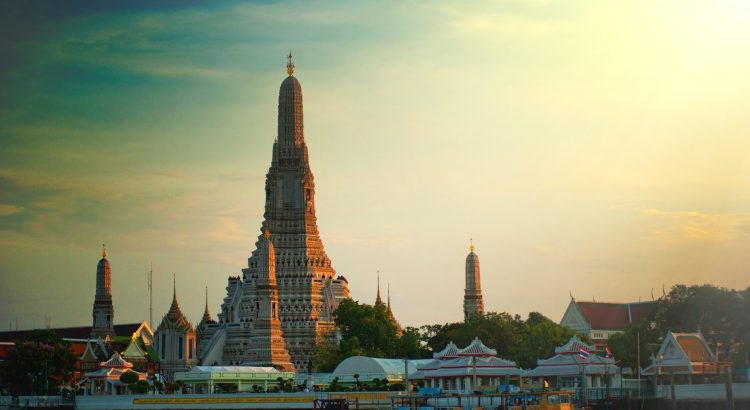 Within Southeast Asia, Thailand is known for its tropical beaches, ancient temples, royal palaces, and even older ruins of past cultures. The capital of Thailand holds many of these wonders and is a hot spot for tourists. The street life is always vibrant and full of people exchanging wares who are participating in festivals. The natural landscape is kept intact and is showcased through parks and riverside views. While there are numerous things to see, the following five places should be near the top of your list when visiting Bangkok, Thailand

The Grand Palace sits at the heart of the city and contains a complex of royal buildings and is often a visitor’s first destination. This palace has been in use since 1782 serving as the residence of kings of Siam and later Thailand. The Grand Palace is still in use for official events such as royal ceremonies and state functions. The layout is mostly rectangular with walls surrounding the complex. The palace is made up of multiple buildings, halls, and garden spaces.

The Temple of the Emerald Buddha, within the Grand Palace grounds, is a tourist destination in itself. While named a temple, this building is more accurately a chapel, as it does not contain any housing for monks. The Emerald Buddha is made up of jade or jasper stone and is clothed in gold robes. This statue is considered the palladium of the Kingdom of Thailand, which means that it is of such great value to the nation that the kingdom depends on it for stability.

The third attraction is the Wat Arun, which translates into the “Temple of Dawn,” and it is a Buddhist temple. This temple is the most recognizable landmark in Thailand by locals and foreigners. Most of the temple’s structure was built in the seventeenth century, but its distinctive spires were built in the nineteenth century. The main structure is encrusted with porcelain and reflects the rising sun’s morning rays, as its name implies.

After seeing a bit of Thailand’s architecture, it is nice to visit the raw landscapes that influenced those designs. The Chao-Phraya River runs through the middle of the city, keeping boats afloat and filling its canals. The boats are used for tour guides, travel, and commerce, as boat vendors peddle their goods along the bank. Bangkok hotels on the river provide wide views of city’s landscape. A city is traditionally built up from sources of water first, and numerous bridges connect Bangkok’s banks. When visiting this city, you are likely to run into the Chao-Phraya River, and the locals do their best to keep this river in excellent quality.

Lumpini Park is the last on this list, and it creates open space, which is rare in bustling cities such as Bangkok. The greenery showcases local species of plants, and playgrounds invite families to visit in a more peaceful environment. The multiple paths wandering around the lake draw in morning and evening joggers to travel the park’s two and a half kilometers of land. After traveling a city with large crowds and tourist traps, it is nice to find a calmer atmosphere of Bangkok before returning.