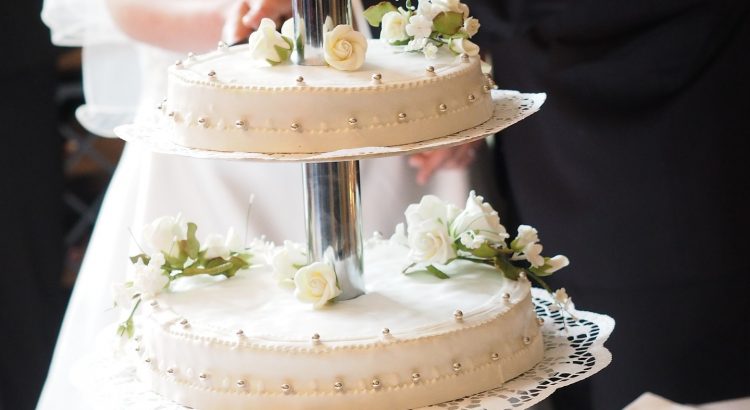 Six years before her coronation, Princess Elizabeth wed Philip Mountbatten. The wedding, held in 1947, was a magnificent affair and broadcast to around 200 million listeners by radio.

The royal couple wed at Westminster Abbey on 20th November and waved from the Buckingham Palace balcony to the adoring crowds patiently waiting for a glimpse of the happy couple.

Patisserie chefs at Le Cordon Bleu, London’s famous culinary school, will present the Queen with a reproduction of her huge wedding cake to celebrate her 70th wedding anniversary with Prince Philip.

The chefs spent months painstakingly crafting, baking and piping the nine foot tall, 500lb cake masterpiece. The four-tiered creation is decorated with delicate frills and intricate detail and completed with white roses at the top.

The top tier is to be given as a gift to Prince Philip and the Queen to celebrate their anniversary.

The chefs had to study old cake recipes to create the correct cake, which was a challenging bake due to the scale and sheer size of the cake. Each detail was hand-drawn to create templates as the originals no longer exist. In total, the chefs spent hundreds of hours recreating the cake with 55lb of sugar, 60lb of butter, 660 eggs, 75lb of flour, 80 lemons and oranges, 150lb of marzipan and 300lb of nuts and dried fruit. White royal icing completed the cake, consisting of 110lb of icing sugar.

The cake featured in a television documentary on ITV aired in November, titled ‘A Very Royal Wedding’.

Host Alexander Armstrong, of gameshow Pointless, will present the cake’s unveiling in all its splendour, and will uncover how the UK hosted such a grand wedding merely two years after the end of World War II, which left Britain very poor. The country was largely bankrupted, with many citizens surviving through suffering and sacrifice.

Rationing, which was still in place at the time, did not apply to the Queen’s wedding cake.

Both incarnations of the cake contain almost 700 eggs and 30 pints of rum. The bottom layer of the cake will be donated to Royal Hospital Chelsea pensioners and other nursing homes and charities.